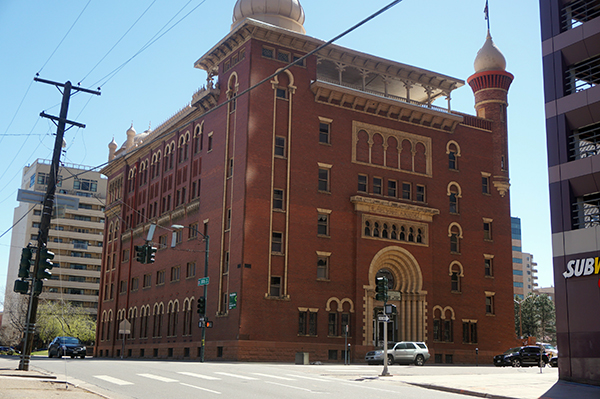 The shrine and parking lot, both bought by Lubin’s DMPT, LP, cover 0.68 acres. The building sits at the corner of 18th Avenue and Sherman Street. It totals 36,000 square feet and was built in 1906.

The parking lot totals 17,213 square feet of asphalt. In 2003, that site was approved for a 650-foot-tall skyscraper as part of a deal where a developer would use proceeds from that commercial tower to pay for upkeep on the historic shrine building.

Lubin declined to comment on his plan for the property when reached by phone on Monday.

The Shriners built the Sherman Street temple between 1906 and 1907. At the time, it was the largest Shriner mosque in the country, according to the National Park Service, and the construction budget came in at $190,000.

According to Park Service documents, the building caught fire in March 1924. The Shriners then sold the building to the Scottish Rite Masons that same year. They used the sale proceeds plus $53,000 worth of insurance money to build a new mosque at 50th Avenue and Vrain Street. That property was recently sold. 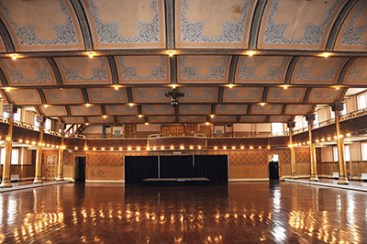 An interior shot of the ballroom. Courtesy Historic Denver, Inc.

But the property’s last 15 years might be just as interesting as its first 20.

Martin Wohnlich and Wes Becker bought the temple and the adjacent parking lot for $3.9 million in 2000. According to media reports, Wohnlich and Becker announced plans for a 51-story building on the temple’s parking lot.

Their idea was to use revenue from the skyscraper to preserve the temple, which then would be rented out as a for-profit event space.

Wohnlich and Becker also shopped the development proposal around to other real estate firms. A group led by Donald Trump and New York-based Bayrock Group looked at the property in the mid-2000s, and put itunder contract for $22 million, according to a Colorado Real Estate Journal report.

After that deal fell through, Denver-based firm Barrons Development took a run at the site with plans to build a 54-story tower, the Rocky Mountain News reported in 2006. Barrons was unable to close that deal by a November 2006 deadline, the paper reported.

Today the temple is an event space. The parking lot still sits undeveloped. Wohnlich declined to comment on the sale when reached by phone on Monday, referring any questions to the property’s new owner.

Lubin has yet to take on a major development project in Denver. He did announce plans to build a new $140 million hotel and casino in Gulfport, Mississippi, earlier this year, according to local media reports.

The Chattanooga Times Free Press reported a Lubin-headed group also bought an office building in 2014 with plans to turn it into a hotel. The article pegged that project at about $31 million.

If he builds every single foot of height allowed under the deal Wohnlich and Becker struck 13 years ago, Lubin could develop Denver’s tallest skyscraper. The 2003 zoning amendment provides for a 650-foot-tall building with a 65-foot skyscraper.

But the site’s new owners still will have to maintain the historic temple building, according to a document recorded last week and signed by Lubin that references the 2003 agreement.

Any modifications to the El Jebel temple will require approval from Historic Denver, the local preservation group. That group holds easements on both the exterior and the interior of the building.

“That is especially rare. It’s the only interior easement we have,” Levinsky said. “It was conveyed at the same time as the exterior easement, because this building’s interior is particularly spectacular.”

About The Lawson Knowlton Team

Our firm sells more apartment buildings in Denver and across Colorado than any other firm in the State. From 2007, Pinnacle Real Estate Advisors has accounted for 54% of apartment building sales in the Denver Metro area between 5 and 200 units. The Lawson-Knowlton Team has completed 100's of multifamily investment transactions, totaling more than $410 million.